A Win-Win: Unbanked Americans and Federal Government Both Benefit from Direct Express® Program

by Ronda Kent, Chief Disbursing Officer, U.S. Department of the Treasury, Bureau of the Fiscal Service

When the U.S. government needs to issue a payment – whether it be a federal income tax refund, a Social Security benefit payment, or a payment to a vendor – the U.S. Department of the Treasury’s (Treasury) Bureau of the Fiscal Service (Fiscal Service) executes that payment. For more than 100 years, Fiscal Service made its payments using paper checks, with the peak occurring in 1975 when more than 700 million checks were issued. That same year, the first electronic payment was made through what is now called direct deposit, and the payment landscape was forever changed. 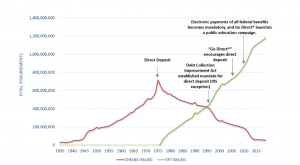 As technology improved and electronic payments became faster, cheaper, and safer than paper checks, Fiscal Service printed fewer checks and sent more payments electronically. In 2019, Fiscal Service delivered 1.2 billion payments totaling $3.7 trillion to recipients around the world. Most of those payments – about 95% of them – were made electronically and the number of paper checks issued dropped down to 54 million. An important contributor to the decline in paper checks from 700 million in 1975 to 54 million in 2019 is the Direct Express® program. 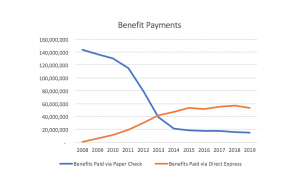 Today, the Direct Express® program issues about 54 million electronic benefit payments each year. In addition to delivering benefit payments to people who otherwise wouldn’t have a means to receive a payment electronically, the program also provides a more reliable, more secure, and cheaper payment option compared to a paper check.

Reliability: A Tale of Two Hurricanes

The difference in federal benefit recipient experience after two of the United States’ most devastating and costly natural disasters also provides an example of the superior reliability of electronic payments compared to paper checks.

In August 2005, Hurricane Katrina wreaked havoc on the gulf coasts of Louisiana and Mississippi. During the storm and throughout its aftermath, Fiscal Service estimated that between 5,000 and 10,000 Americans did not receive their Social Security benefit payment on time – and for many the delay was weeks long.

Fast forward 12 years to August 2017, when Hurricane Harvey made landfall on the gulf coast of Texas. Despite the devastation caused by the storm – according to the National Hurricane Center, it was the most costly hurricane since Katrina – Fiscal Service reported that fewer than 100 Americans failed to receive their Social Security benefit payment on time.

These two terrifying events, one in 2005 and one in 2017, illustrate how the almost ubiquitous use of electronic payments by federal beneficiaries improved the lives of everyday Americans, especially during times of disaster. Since most Americans in 2017 were using direct deposit to receive their benefit payments, including millions of people using the Direct Express® card, individuals living in or around the impacted areas were still able to receive their funds on time in a time of need.

Additionally, electronic payments are deposited to recipients’ accounts on the day payment is due, so funds are available sooner than with check payments. When a check is misrouted, lost in the mail, stolen, or fraudulently signed, Treasury must send a replacement check to the recipient. This can result in a delay in payment of weeks or months if fraud or counterfeiting is involved, thereby creating a hardship for benefit recipients who rely on these payments for basic necessities such as food, rent, or medication.

Another important benefit of the Direct Express® program is that cardholders have the same, and in some cases better, consumer protections for fraud, loss, and errors that are provided to traditional bank account holders under the Consumer Financial Protection Bureau’s Regulation E. Cardholders have 90 days to dispute a transaction, rather than the required 60 days, and accounts are protected by MasterCard Zero Liability, FDIC-insured, protected with EMV/PIN technology, and cannot be garnished for outstanding debts.

Cheaper: The Cost of a Paper Check

According to a Direct Express® cardholder survey, nearly 70% of cardholders report that they are unbanked, meaning they don’t have a bank account. By comparison, 6.5% of the U.S. population as a whole is unbanked. For people who can’t qualify for a bank account or afford the fees associated with maintaining one, the fees associated with cashing a check can be costly. According to PaymentsSource, check-cashing fees can run from $15 to $23 to cash the average SSI check of $770. Paying rent or bills can require cash being converted into a money order, which is another added cost.

The Direct Express® program offers a low- to no-cost prepaid debit card account that doesn’t require a credit check or minimum balance to enroll, and doesn’t have any sign-up fees, monthly fees, or overdraft charges.

The card enables cardholders to make purchases, pay bills, and get cash at thousands of ATMs and retail locations. Direct Express® cardholders get one free ATM withdrawal per federal deposit and have access to over 100,000 surcharge-free ATMs nationwide. In addition, when making purchases cardholders can get cash back free of charge. If used wisely, the card can be used 100% fee-free.

In addition to the benefits for payment recipients, Direct Express® saves money for the taxpayers. In fiscal year 2019, if all Direct Express®payments had been made by paper check, the U.S. government would have spent more than $30 million.

For more than a decade the Direct Express®program has been mutually beneficial for both cardholders and the federal government. It offers a way for the government to provide a reliable, secure, and fast electronic payment option while empowering 4.5 million federal beneficiaries with access to the financial mainstream.

Ronda L. Kent serves as the Assistant Commissioner for Payment Management and Chief Disbursing Officer in the U.S. Department of the Treasury’s Bureau of the Fiscal Service. The Fiscal Service provides centralized accounting, financing, collections, payment, and shared services for the federal government.

Ronda is responsible for providing executive leadership for the disbursement of more than 1 billion Treasury-disbursed payments totaling $3.7 trillion annually, the accounting for those payments, and the resolution of payment claims. Previously, Ronda served as the Deputy Assistant Commissioner for Debt Management Services where she was responsible for preventing and collecting debts owed to federal and state agencies through a variety of programs.

Ms. Kent joined Treasury in 1996, and since then has worked on a variety of programs and issues related to electronic commerce (payments and collections), privacy, and debt collection. Before joining Treasury, Ms. Kent served as an attorney with the Federal Deposit Insurance Corporation, the Resolution Trust Corporation, and in private practice. Ms. Kent received a B.A. from the University of Connecticut and a J.D. from the University of Connecticut, School of Law.