Unbanked individuals face disadvantages such as limited access to financial services, increased costs and inconveniences, and a lack of financial security. In a recent resolution, the National Hispanic Caucus of State Legislators (NHCSL) recognized that “certain demographic and socioeconomic groups like Hispanic Americans, African Americans, and the impoverished, are disproportionately affected by” these disadvantages, and ratified a resolution to encourage electronic payments for the unbanked.

“…creates opportunities for increased financial capability for unbanked populations, bringing them closer to the benefits of the financial mainstream, with high levels of convenience, safety and reliability when compared to cash or paper checks, and chart a path to credit-building.”

The resolution, which was unanimously ratified in December 2019, further noted that since 2011 the federal government has made available the Direct Express® Prepaid Debit Card to 4.5 million beneficiaries, and said that the program has,

The resolution also “applauded” programs such as the Direct Express® for the work it is doing in the area of financial capability.

The text of the resolution is below. 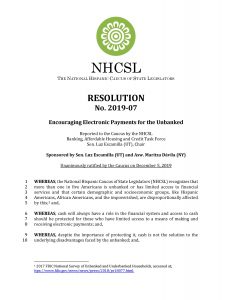 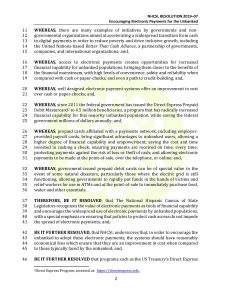 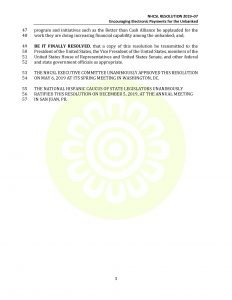