In 2021, over half of existing cardholders received an Economic Impact Payment (aka Stimulus Payment) via their Direct Express® card with 9 in 10 saying they were satisfied with how they obtained their stimulus payment. 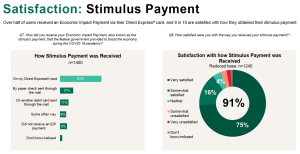 In addition, nearly 10 percent of cardholders received an Advance Child Tax Credit via their Direct Express® card. Again, the survey demonstrated that 9 in 10 were satisfied with how they obtained their payment. 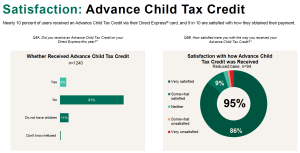 For the second year, the impact of COVID-19 on cardholder behaviors was measured.  One in seven cardholders say they are using their card more often for a variety of purposes including paying bills, paying for streaming services, and shopping both at physical stores and online.  Mobile app users have particularly increased their online purchases.

Most of those who have used their card more often for a variety of payments because of COVID-19 say they will continue to use it regularly in the future.

The annual cardholder research is designed to: